5 Reasons Why You Need to Absolutely Need to Visit Namibia

5 Reasons Why You Absolutely Need To Visit Namibia
Hello Displorers, welcome back to another exciting video presented to you by Displore and thanks for watching. In this video we shall be bringing you 5 reasons why you absolutely need to visit Namibia before you die…but first of all let’s have a brief background of Namibia.
Namibia is a country in Southern Africa bordered to the west by the Atlantic Ocean, it shares land borders with Zambia and Angola to the north, Botswana to the east and South Africa to the south and east. Namibia is a member state of the United Nations, the Southern African Development Community, SADC, the African Union and the Commonwealth of Nations. Namibia has been inhabited since early times by the San, Damara and Nama people. Around the 14th century, immigrating Bantu peoples arrived as part of the Bantu expansion. Since then, the Bantu groups, the largest being the Ovambo, have dominated the population of the country; since the late 19th century, they have constituted a majority. In 1920, after the end of World War I, the League of Nations mandated administration of the colony to South Africa. As Mandatory power, South Africa imposed its laws, including racial classifications and rules.
Namibia gained independence from South Africa on 21 March 1990, following the Namibian War of Independence with its capital and largest city as Windhoek. However, Walvis Bay and the Penguin Islands remained under South African control until 1994. Namibia has a population of 2.6 million people and a stable multi-party parliamentary democracy. Agriculture, herding, tourism and the mining industry including mining for gem diamonds, uranium, gold, silver and base metals form the basis of its economy.
If you are new here, welcome, be sure to subscribe and turn on notifications so you don’t miss any of our videos.
Namibia is one of the best places to visit in Africa with vast, interesting and diverse flora and fauna which will keep any visitor want to stay longer. If you have been perplexed if Namibia is the country you should visit, here are 5 reasons why you absolutely need to visit Namibia.
1. Namibia is Home To Some of Africa’s Most Incredible Landscapes
The sand dunes in Namibia are some of the biggest in the world reaching heights of up to 380m and composed of sand estimated to be 5million years old. Imagine mountains made of sand and you’re half way to picturing the spectacular dunes of Sossusvlei. As the sun makes its daily journey across the sky, these dunes change color like a chameleon from dazzling orange to deep rusty red. Few places in Africa beat this region for sheer photogenic beauty thanks also to the contrast created by the blackened dead acacia trees that punctuate the landscape. You’ll find these wind-formed behemoths in the Namib Desert, one of the oldest on the planet, but this isn’t the only desert Namibia claims. Next door lies the Kalahari, a vast sea of red sand and golden grass that bears strong resemblance to the deserts of Australia. Wherever you go you’ll find that Namibia really is a photographer’s dream. Namibia is an extraordinary place magnificent, magical and mysterious. You'll struggle to find more striking natural landscapes or bigger, clearer skies anywhere in Africa. Inland there is the drama of Damaraland with its endangered desert elephant and rhino, while at Sossusvlei, one of Namibia’s iconic destinations, climbing to the top of the highest sand dunes is a must. Then there are the famous salt pans of the Etosha National Park with their abundance of game, and the Fish River Canyon in the south second only to the Grand Canyon in size. There is also the Skeleton Coast, a vast, desolate stretch of coastline littered with shipwrecks due to the tempestuous seas. Although seemingly endless and hostile, it hosts incredibly adapted fauna and flora who flourish there.
2. It's a Safe Destination
Namibia is considered one of the safest countries in Africa as its streets as well as political situation is very calm and welcoming. Since gaining independence from South Africa in 1990 Namibia has enjoyed decades of political stability and good governance that has encouraged reconciliation and invested in infrastructure and education. It has one of the highest literacy rates on the continent and the media are allowed to cover opposing political parties and views, which is not always a given in African countries. Namibia enjoys good governance that has encouraged inter-racial reconciliation and invested in infrastructure and education which can be attributed to why it has one of the highest literacy rates on the continent. 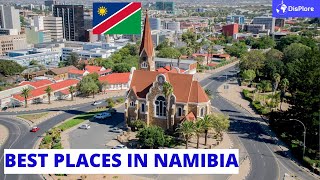 10 Best Places to Visit in Namibia